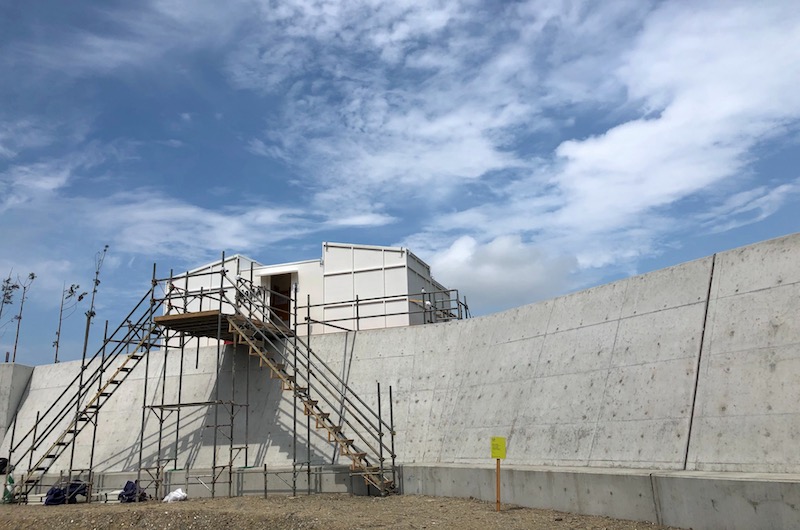 A project to create a “wall-related art pavilion” on top of a huge breakwater created by the tsunami in Ishinomaki City, Miyagi Prefecture.  Three other artists participated in the project.In addition to the outdoor sculptures on display on the walls, a wide range of history, from graffiti to contemporary art, was presented inside the pavilion.

・A total of 339 kilometers of seawalls have been planned in Iwate, Miyagi and Fukushima prefectures since the disaster, at a cost of about 1.35 trillion yen.The height is estimated to be up to 15 meters, depending on the number of people hit by the tsunami and the scale of the damage.

・Seawalls are one of the most important issues in tsunami-affected areas.Embankments are one of the most important issues in tsunami-affected areas.This is because most of the people who live on the coastline have made their living by fishing, which physically cuts off their lives from the sea.  There are also questions about safety, and it has been pointed out that if another tsunami were to occur, it would not be possible to see it and evacuate the area. In fact, there has been a lot of debate about seawalls, but halfway through the debate, the administration has forced the construction of seawalls all over the Tohoku region.

・There is a reason why we chose the seawall at Momonoura in Ishinomaki City.  In fact, the residents of Momonoura were opposed to the construction of the seawall because they had relocated to higher ground.But the state built the seawall semi-forcibly because it was “protecting the national highway”.

The MoWA was temporarily anchored by straddling the inside from the outside of its seawall.

・The interior of the pavilion was divided into four rooms, with an annex and two sculptures in the open air.Each room was grouped according to a theme: an archive of wall art from around the world, documentation of EHS’s previous murals, an archive of related books, and a plan to paint a mural on a seawall. In the annex, a record of Riva Christoph’s series of murals in China, BIEN’s work involves the creation of a hypothetical mirror-matched wall on a seawall and the digging of a painting into the hypothetical wall, so that the space between the walls becomes like a cave. Moriyama created a 5-meter-high stage based on a shrine that had been swept away by the tsunami, and Moriyama himself performed on the stage during the exhibition.

The first plan we submitted incorporated the idea of painting a mural on the seawall, but we were unable to obtain permission. The levees were certified by the state and it took several years for the construction budget to be paid for, so in the meantime they couldn’t get permission to paint on the walls or install anything directly. This is why all the works, including the pavilion, approach the wall without physically touching it.

The project showcased both archives and new work, with EHS placing particular emphasis on the creation of archives. It’s about imagining with people what the seawall will look like in the future by referring to the history of historic walls around the world and the art that has come out of them. Through such a process, I was able to share my awareness of the problem with the visitors.

The history of art on the wall, as we see it, begins with the Mexican mural movement, the federal art program in New Deal policy, graffiti in New York, “The Border Art Workshop” held at the Mexican-U.S. border wall, as well as various art on the Berlin Wall in Germany, and performances by Cai Guo-Qiang and Marina Abramovich on the Great Wall in China.  It included Banksy’s project at the WEST BANK WALL in Palestine.