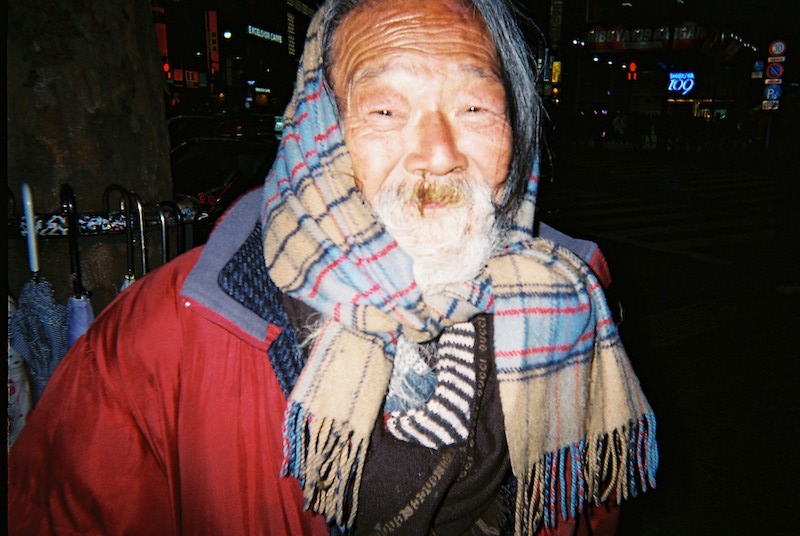 A series of photos taken by “Mr. Syukan-” who was homeless in Shibuya for a while.The prints of this work were sold at the exhibition, and the profits from the sale were used to buy a new camera for Mr.Syukan.

This project started by a chance, when one of the EHS members was asked for help by a friend who is a stylist. He wanted to style clothes for a homeless person, so the two went to Shibuya and asked Mr. Syukan, a homeless man with a dreadlocks, to be a model. Mr,Syukan agreed, but he asked them one favor: “If you could lend me that camera, I’d love to take a picture of it.”

So we decided to give a disposable camera to Mr. Syukan. He lost his camera once, but succeeded to development twice.  We were amazed. Syukan’s photos are very interesting. The choice of subject, the composition, the dynamic camera work that closes in on the subject is wonderful, and most of all, it captures the reality of his life in Shibuya itself.

He came to the exhibition sometimes and seemed to enjoy taking pictures with the audience. He loved art and music, and once took a newspaper clipping of an art article and gave it to an artist who was in the same exhibition. One of his photos also showed the entrance to a gallery run by the Tokyo Metropolitan Government.

There are several features in the photo.First of all, all photos are taken in Shibuya, and there’s an umbrella or a bag thrown on the ground somewhere in many photos.  These were things Mr. Syukan picking up from the city. These loads multiply with each change of location, eventually gathering in his sleeping quarters. Umbrellas, in particular, are an essential tool for his survival, and he gives them to foreign tourists when it starts to rain and gets a tip.It’s easy to get an umbrella in the city of Tokyo, because when it stops raining people just throw it away.

There’s a photo that’s shrouded in mystery, because It is Syukan himself in the photo. And there is also close up of a stranger in both developments, a bearded, smiling man. I later saw him on the street and he was carrying a large camera. As Syukan said, he is a photographer who has been shooting Mr. Syukan continuously. They looks are good friend and taking photos each other.

Mr. Syukan actively approaches the subject. People in pictures have funny reactions, probably because it’s unusual for a homeless man to take a picture. There are young men and foreigners in funny poses, middle-aged men and young women with astonished expressions, and the most astonished is a young monk, caught closest to the camera.  The young monk is a Tenrikyo monk, and Syukan feels sympathy for this young man, because Mr. Syukan himself used to be a monk in a temple.

This work is from January 2016 to 2017. The relationship continued after that, but when we left Tokyo for about three months and came back, Syukan had disappeared from the city. We looked for him for a while, but could not make any sign of him at all. We are always looking for and waiting for him to come back to Shibuya someday.