the fish exchanged to art 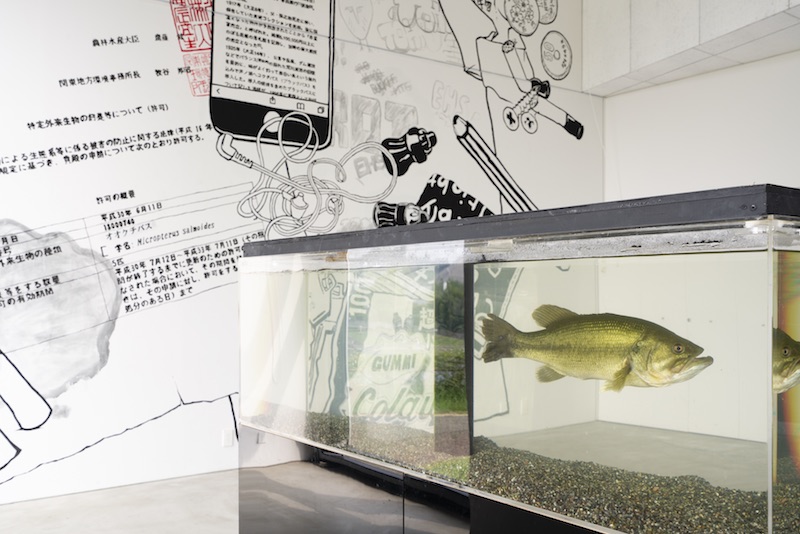 Bass fish caught in the tournament will be brought to the museum in front of the lake by the winner of the tournament. And during the exhibition, the fish were cared for by the curators.

・This project was carried out in the exhibition “Play Outside” at the Ichibara Lakeside Art Museum in 2018. Ichibara Lakeside Art Museum is a museum facing a dammed lake called Lake Takataki, and the dammed lake is crowded with many people who visit for leisure. The most common visitors are bass fishermen. They congregate on the lake early in the morning, fishing by boat or by diligently circulating the shore. The museum doesn’t think well of them fishing on their own property, and at the same time, the fishers rarely visit the museum. The purpose of this project was to connect the museum with such a bass fisher.

・Black bass fishing has a long history, and major tournaments are held all over the world, making it a very popular leisure and sport with a large number of competitors. The reason for this is that bass fishing is very profound and is considered to be a combination of sport and philosophy. Even artists have a lot of bass fishing fans. However, in Japan, black bass is regarded as an invasive species that destroys the ecosystem and is subject to extermination, and it is illegal to bring back live bass. Once every few years the media would bash the ferocity of the bass and criticize the behavior of the bass fishermen. But bass fishermen also counter that it’s other invasive species that are having the biggest impact on the ecosystem.

・We needed special permission to show black bass in this exhibition. We went to the Ministry of the Environment, submitted over 30 pages of documents, and spent over a month getting the final permit. The Ministry of the Environment has made a rule for us to display a “copy of the permit” in the same room as a condition for displaying black bass, so we painted a copy of the permit as a mural on the wall. The bass was also displayed in front of a huge window overlooking the lake and could be seen from the outside.

・With permission from the Ministry of the Environment, the next step is to find a bass fisherman who can help. This time we contacted the Japanese Professional Bass Fishing Association (NBC) and asked them to help us. The request for help states, “We would like to display the fish caught by the black bass fishing champions at the museum and give the champions tickets to the museum restaurant and give away free museum tickets to participants in the competition. NBC readily agreed and the project became a reality.

・In 1925, businessman Akaboshi Tetsuma imported black bass from the United States and released them into Lake Ashino in Kanagawa Prefecture. As a result, it has spread throughout Japan. Yanosuke, the father of the Tetsuma, made a huge wealth by procuring supplies for the Navy. Born the eldest of six sons and six daughters, Tetsuma inherited a huge inheritance, and after graduating from Tokyo Junior High School in 1901, he went to the United States to attend Lawrenceville School. After graduating from the University of Pennsylvania while studying abroad, he returned to Japan in 1910 at the age of 27, and upon the death of his father Yanosuke in 1917, he sold his art collection. It was called the “Akaboshi Family Sale” because it included many properties that later became national treasures. A total of more than 5,100,000 yen (worth to 200million USD) was sold, making it the largest sale of its kind at the time. This budget was later used to import black bass to Japan. Thus the art and the black bass were exchanged.

Initially, the museum staff opposed keeping the bass because of the possibility of them dying. We asked a professional aquarium company to help us set up the environment. But there was a problem, the bass wouldn’t eat the store-bought bait. So I consulted with NBC, and they gave me their opinion that I should give them what they are eating at that place. The fishermen’s association at Lake Takataki was releasing pond smelt, so when they gave the bass frozen pond smelt, the bass started to eat it with gusto.

As the exhibition progressed, the bass became more familiar to us. The closer we get, the closer the bass gets to us. Somehow, the bass seemed to be staring at the faces of the audience with a grimace. The bass became a favorite of the museum. However, there is a sad fact: the bass must be killed when the exhibition is over, according to the ordinance.And on the day of the removal, we unintentionally dropped the bass into the dam. Of course, I fed them well enough, let them slowly get used to the water condition, and dropped them. This is a secret between you and us who have read this text to the end without getting bored.